So far the reactions to the death of a 96 year old billionaire landlady with a penchant for protecting nonces and a nostalgia for racist colonialism have been, let’s just say, a little bit over-the-top. David Cameron’s favourite X-Factor contestants – Jedward – have so far outshined everyone, including supposed republicans, in their response. 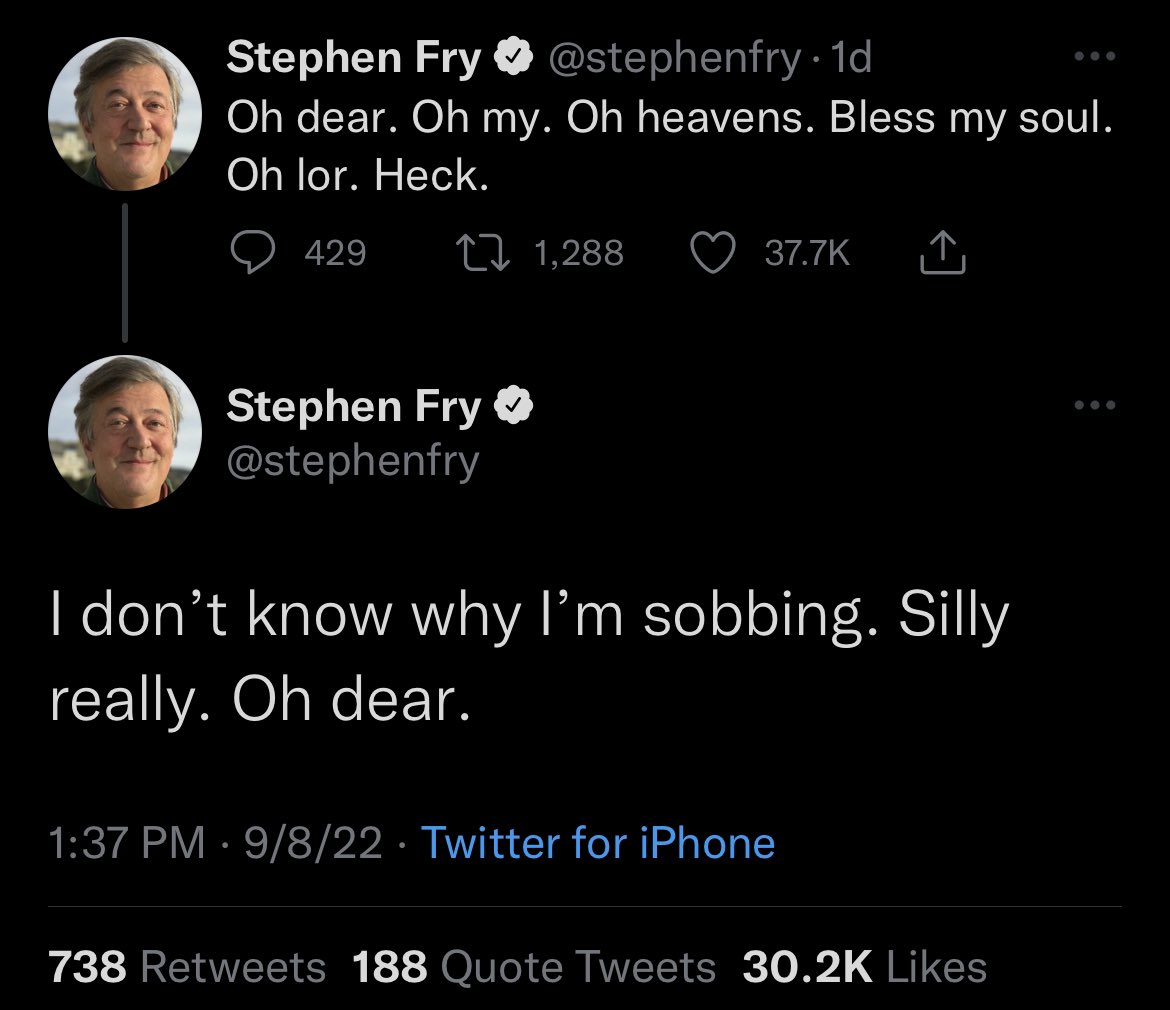 Stephen Fry devolved into paroxysms of posh grief (either that or he was edging, in which case, fair play). Ray Parlour downed a shot of ‘cobrabomb’. John Simpson (the journalist) fantasised about Irish republicans toasting the Queen in unison. The public have been dumping marmalade sandwiches outside Buck Palace(!). And almost half people polled by YouGov admitted crying about it. People do weird things at times like this, for sure. But, I just want to lift my fellow Brits out of their misery. There’s no need to be sad – she was a total POS .

To those who think this is insensitive – it’s infinitely more insensitive to eulogise a malevolent (remember the nonce-guarding) and murderous (head of an armed forces responsible for 70 years-worth of imperialist mass murder) billionaire. She’s not from a fairy tale – grow up. These same people will not be screaming about insensitivity when Vladimir Putin dies…

Apart from when the media have been staring at clouds trying to descry her face, they’ve been claiming she was a committed feminist, anti-racist, LGBT+ supporter, wonderful mother, beacon of democracy, a public servant and somehow masterminded the independence of all her colonies. Do I have to explain how utterly deranged these claims are? Is it opposite day (or week)? Suffice to say, each and every one of these claims is false.

Meanwhile, food banks are being shut down, cancer treatments cancelled, and strikes called off all in her honour. Actually, this is quite fitting for someone who hated the working class so much. But while half the country is in collective delirium, the ruling class is exploiting the opportunity to the full. People are being arrested for signs as mild as ‘Not my king‘ or for simply… carrying eggs. The BBC dismissed the energy crisis which will kill so many this winter as ‘insignificant‘ next to the death of one 96 year old. And, in a vile act of obvious deceit, Sky described a march through London for the victim of another police murder – Chris Kaba – as a tribute to the Queen.

Now we can get used to the new normal. A 73 year old King throwing toddler tantrums in the full glare of the public eye and Prince Andrew… well… touching his own daughter’s behind. Charles has promised ‘lifelong service‘ which, for someone who has 3 footmen to escort visitors to his office ‘each responsible for a short segment of corridor’ and 4 valets to help him change clothes, will be a feat in itself.

Charles was born into a world where he has never had to do anything for himself. And so a future King with all the responsibilities...